Double-click here to add your own text.

Torbay Archery Club was one of the first users of the new Queen's Park in Paignton when it opened, with major competitions being held there in the first decade of the 19th century.

It is probable that Torbay Archery Club, like many other sports clubs, closed down at the outbreak of the 1914-18 War. There are gaps in the story since that time.  Although not listed in any directory between the Wars, the Minutes of Torquay Corporation record that the Torbay Archery Club 'sought a suitable ground for its activities' but was told in March 1931 that none were available.

The Club was active for a short time after World War II when Devon County Council bought Shiphay Manor (the then Shiphay Manor Private Hotel), with Torquay Archers holding their meetings on the lawn in front of the house during 1949.

Torquay Company of Archers was re-formed in 1985 by Bob Ambridge, who was the Chairman of the club until 2002.

The Torquay Club is now very active and expanding and is based at Torquay Academy where we are able to meet once a week on Saturdays throughout the year for practice in the Sports Hall (18.28 m).  In the summer months we shoot on the Academy’s sports field or in the hall, depending on the weather.

Torquay Company of Archers is very inclusive, providing opportunities for all people over 10 years old (this is a nationally recognised limit for H & S reasons).  People from that age into their 90’s can enjoy archery purely for recreation and fitness and/or choose to compete in events, which can be our own member handicap events or in competitions with other clubs.  People with a wide variety of disabilities are able to take part and are welcomed.  Our principal coach, Keith Hawkesford, is highly qualified for working with archers of all abilities.

Unusually, archery is also a sport that families can participate in together and we currently have several families who come and shoot at our meetings.  Archery is also an ideal recreation or sport for the 'Ageing Well' concept.

If you are interested in trying archery, we at Torquay Company of Archers would be pleased to welcome you to sign up and enjoy a ‘Taster’ session or a Beginners course (please see beginners section). 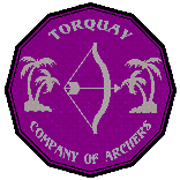